Zone of the Enders Wiki
Register
Don't have an account?
Sign In
Advertisement
in: Orbital Frames, The 2nd Runner

Edit
watch 01:36
We're Getting Mutants in the MCU - The Loop
Do you like this video?
Play Sound

Anubis was one of the most powerful Type C Orbital Frames featured throughout the Zone of the Enders series. It is Ridley Nohman's trademark Orbital Frame and was designed by his father, Rikoah Hardiman.

True to its name, Anubis has a dog-like anthropomorphic appearance, and its physical appearance is very similar to that of Jehuty, but with some key differences. Its legs are reverse-jointed, with a set of six wings and most notably, a long prehensile tail. It is revealed in Dolores,i that the "wings" on its back are actually huge vector traps.

It originally had a color scheme similar to that of Jehuty, with everything that was blue on its twin brown on Anubis, but it is given a revamp in The 2nd Runner, now sporting a white, beige, and black color scheme. Its normal shot fires three laser blasts at a time in rapid succession, its Dash attack fires a group of zig-zagging lasers that deal consecutive damage for a bit before vanishing and its Burst attack fires off what appears to be a glob of homing magma.

In its first appearance, Anubis is shown to be absolutely invincible in combat, and Jehuty is only able to evade its attacks as it constantly teleports to Jehuty's current location with an impenetrable shield immune even to Burst attacks. Anubis' primary weapon is a long-range battle staff with a blade at the end. Due to having already been installed with Zero Shift, Anubis is considered the stronger of the two twin frames. Zero Shift creates the illusion of teleportation by moving into compressed space. Near the end of the game, Ridley Nohman had created a duplicate of Anubis (with Ken Marinaris in it), sans the wings to fight Jehuty, but it sustained heavy damage from Vic Viper. After releasing Aumaan and fighting Jehuty, it is defeated in battle as some of its Metatron is absorbed by its twin frame to become Naked Jehuty. After landing on Phobos, Anubis falls into the underground level to absorb Aumaan's power, transforming itself into the upgraded Aumaan Anubis, which atrophied its wings with a set of hexagonal fragments surrounding it and a halo-like structure sitting atop its head. Despite improved performance and the ability to repair itself, it is defeated by Dingo Egret and Naked Jehuty, and the finishing blow splits it in half from the waist down. The head was the only thing that remained of Anubis when Auuman exploded. It was shortly after crushed by a damaged Jehuty, effectively destroying all traces of the fearsome Orbital Frame.

Despite its massive power and initial superiority over Jehuty, Anubis displayed the very same problem that its predecessor, Idolo had: psyche degradation. The pilot Ridley Nohman was shown to have also been degraded into insanity, but on a much worse degree to the point of celebrating nihilism, which he claims is the true will of Metatron.

Anubis has an onboard AI (just like ADA on Jehuty) named DELPHI. In Zone of the Enders The 2nd Runner, DELPHI is heard speaking during Aumaan's start-up sequence quoting "I was created...to destroy....all." This has caused a common misconception among many fans who have assumed this was ADA quoting this line. However, this shows some indication of DELPHIs opposing personality to her AI twin sister ADA where ADA quotes at the end of Zone of the Enders "This is what I live for. This is the purpose of living, for those who have no life." DELPHI is portrayed to have a programmed purpose of destruction while ADA has a programmed purpose to protect life. DELPHI is credited in the ending credits of the Japanese version Anubis: Zone of the Enders and is voiced by Yoshino Miki (Japanese Version) and Cynthia Marcucci (English Version), the same voice actresses that voice ADA.

The form Anubis takes on after fully integrating with the fortress Aumaan. Most of its armor has been stripped down to the skeletal structure similar to Naked Jehuty. Its color scheme has taken on a white coloration and its head changes to reveal the second set of eyes below the normal ones whilst a halo-like silhouette floats above its head. Its wings have been replaced by a massive plethora of hexagonal bits that swarm and hover deftly about around it. Its basic abilities have been greatly enhanced. In all later re-releases of The 2nd Runner, it can repair itself by pulling off the plates of the core area of Aumaan and draw energy from them. Anubis cannot be targeted in this state, instead the player has to destroy as many of the plates as possible to halt its recovery. When its health is low, it'll begin using its Burst Shots to defend the plates.

The strongest Orbital Frame, controlled by Ridley Nohman. A twin mech developed along with Jehuty, it has similar characteristics. It has the ability to use an Urenbeck Catapult in order to propel itself at incredible speeds. Anubis's abilities are similar to Jehuty's through the use of burst attacks and dash attacks. Anubis is already programmed with Zero Shift at the end of Zone of the Enders and is thus renowned as the most powerful orbital frame in existence.

In the anime series Zone of the Enders: Dolores,i Anubis demonstrates the ability to redirect projectiles using its vector trap. When an enemy orbital frame fires beams and missiles, Anubis opens the vector trap to intercept the attack and redirects it back at the enemy. The missiles enter and exit the trap while still in flight, indicating that no fuel was expended and that objects inside a vector trap are in suspended animation.

In Vs. Mode, Anubis receives a decrease in power and mobility to balance it with the rest of the cast. It still has access to all of its attacks shown throughout the course of the main game, but the Dash and Burst Shots have a cooldown time before they can be used again. During the Burst Shot however, Anubis will move as if it is dashing and will automatically block some attacks. If the opponent is any of Jehuty's forms, the frame will be pushed back by an invisible force while the Burst Shot is being released. Zero Shift is activated with L1 but it can only warp towards and away from the opponent and can nullify all attacks in its trajectory. Its melee speed is rather sluggish but has great range thanks to the length of the spear and its fourth strike, normal or Burst, can break through Guards. As Aumann Anubis, its warp time is decreased traveling away but its Burst Shot travels much faster and has less cooldown time as well as the Dash Shot. It is also completely invulnerable when in its grabbing animation.

In the Special and HD re-releases, both forms were rebalanced. the speed of both versions have been swapped. Anubis' melee speed has also been considerably improved. With the introduction of Subweapon energy however, they have been considerably nerfed as their Zero Shift consumes ammo.

The Orbital Frame Anubis is named after the Egyptian god that was associated with the mummification and protection of the dead for their journey into the afterlife.

Concept of Anubis, Aumaan Anubis can be seen on the left 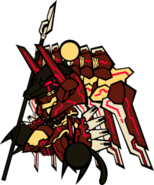