Zone of the Enders Wiki
Register
Don't have an account?
Sign In
Advertisement
in: Orbital Frames, The 2nd Runner

Like Neith and Nephtis, Ardjet possesses a feminine shape, its cockpit noticeably smaller than most Frames. It has a black and white color scheme with a yellow human-like face with black slits for eyes framed by an arrow-decorated helmet. Ardjet's abilities are more suited for long range combat as it does not perform well in close encounters although it can manifest energy blades from its hands should the need arise. It is adorned in a long flowing cape that is actually made up of many 'WISPs'; missile-like drones with smart-homing capabilities that serve a dual purpose: as typical missiles or to grab faraway objects and pull them in. Once all WISPs have been used, they must recover and rejoin into the cape form, leaving Ardjet vulnerable to attack. Its Burst attack consists of morphing its cape into a coffin-like structure, guarding it against all attacks as it gathers immense power in a circular fashion before finally releasing it as a concentrated beam of energy. While not terribly fast, it is able to leave afterimages in its wake via Dash bursts. 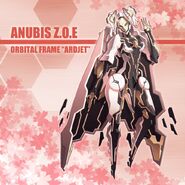