Nicknamed “Dolly” by her lover, Dolores is a research and development assistant in BAHRAM’s Orbital Frame Project. Engaged to be married to Radium, Dolores shares his pro-Martian stance, which makes her and Links a prime target to be taken hostage by a UNSF force that manages to infiltrate the BAHRAM test center in an attempt to seize the Orbital Frame Idolo. Even though Radium arrives to rescue her, she suffers a few gunshot wounds in the crossfire, and later dies in the arms of her fiancé on board Idolo.[1] Enraged and delusional, Radium takes Idolo out on a suicide attack on the remaining UNSF forces.

After her death, Links develops the A.I. of the Orbital Frame Isis that is named after her and regarded as her legacy and daughter. 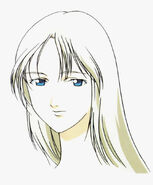