Zone of the Enders: Dolores,i

Hathor (ハトール Hatōru) is the second Orbital Frame piloted by Radium Lavans. Designed as the sister Orbital Frame to Isis, its capabilities are on a par with Isis, if not slightly more powerful.

Both Orbital Frames are derived from the wreckage of Idolo . While Isis' resemblance is less obvious, Hathor's features and design greatly resemble the parent frame. The phrase "SYSTEM OSIRIS" is imprinted on it forehead, marking its make as the successor Frame to Isis.

Hathor is capable of using its Vector Trap as a stealth mechanism to outphase itself from its current 3-dimensional vicinity for a short time, making it invincible as well as completely invisible allowing it to strike at unexpected times and locations. Hathor is also capable of wrapping the wings attached to its feet around itself to shield from attacks.

Radium's ruthless, berserk style of fighting caused Hathor to gain the upper hand at first during his battle with James Links, but later also became his defeat, since James, who thinks more calmly, uses the "vanishing" tricks to outwit him via Dolores's Vector Trap.

Like its predecessor, Hathor has also demonstrated the ability to project an image of Dolores Hayes. The Dolores projected by Hathor is far more sinister than the original Dolores, however, as it agrees with Radium's actions of destruction and holds to his focus on their relationship more than anything. 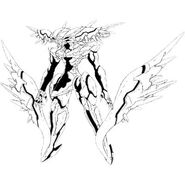