As with most other Orbital Frames, Jehuty is mostly humanoid in shape. Its color scheme primarily consists of blue and orange while silver and yellow in The 2nd Runner. Protruding from its spine are wing-like thrusters that are folded when not in use with two smaller basic ones located at the joints of the knees. Its head is bird-like in shape, giving it a sort of anthropomorphic appearance in contrast to its jackal-headed twin, Anubis. Its right arm is armed with a retractable blade that is automatically charged with energy upon usage. Whilst retracted, a small gun-cannon is located at the hilt. On its left arm is a deflector energy shield which blocks all incoming attacks. At the lower base of its spine are three fin-like protrusions. After upgrading to Ver. 2, these fins separate from the body and orbit the Frame, becoming OPTIONs as they assist in Jehuty's offense. It is possible that Jehuty's AI hardware and main reactor is located either in the head, neck, or just below them in the upper torso, as Anubis was able to detonate strong enough to cancel out Aumann with only those sections remaining.

In The 2nd Runner, it is discovered that Jehuty is the twin frame of the 'complete' version of an identical, stronger Orbital Frame known as Anubis. In the game, Jehuty upgrades to Ver.2, giving it enhanced abilities and the added ability of Zero Shift, which allows Jehuty to dash at blinding speed. It is in this form that Jehuty truly becomes Anubis' equal. After being repaired from extensive damage, Jehuty's armor is essentially stripped down to the exoskeleton, becoming the lighter Naked Jehuty, boasting much more power than the original form of Jehuty. In this form, Jehuty has infinite sub-weapon energy, can take down most Orbital Frames with single strikes and is automatically protected by an energy shield that nullifies anything short of a Burst attack. It also appears to have taken on a slight carnivorous side seen in its grab and throw attack which consists of Jehuty chewing on the captured target before throwing it.

Jehuty was one of two Orbital Frames created by the scientist Rikoah Hardiman as part of Project Aumaan While a powerful machine in its own right, it was also designed as one of the operational keys to the space fortress Aumaan. However, the machine along with Anubis would later be captured by the UNSF and placed in the Jupiter civilian colony Antilia. From there, the AI ADA was reprogrammed by Alan at its very core to self-destruct at Aumaan as a last resort if it fell back into their hands. Jehuty remained in secret up until BAHRAM invaded Antilia with the intent to capture the two units in order to active Aumaan. The original pilot to run Jehuty, Alan, had been killed, but BAHRAM would be foiled when an unlikely Martian youth named Leo Stenbuck wandered into the frame's hangar and stumbled into the cockpit fleeing from a Raptor. Upon activation, Leo destroyed the Raptors and escaped the hangar. After a brief skirmish with one of BAHRAM's aces, Viola Gyune and her Orbital Frame Neith, Leo was informed of his mission to find a way to board the shuttle Atlantis and flee the colony. Before they could, they were required to update Jehuty by downloading drives located throughout the colony to improve its battle performance. Later on the way, they picked up Leo's friend, Celvice Klein.

However, their mission would be continuously sidetracked with Leo's desire to protect the surviving civilians from the unmanned raids as well as confronting BAHRAM's other commanding officers and their much larger Orbital Frames. During an encounter with one of them however, Jehuty was stricken with a virus that compromised both ADA's mind and Jehuty's frame, rendering ADA irrational and glitchy and Jehuty's frame fragile. Leo however managed to restore both of them with a vaccine, bringing both the runner and AI together. They eventually defeated all three BAHRAM officers, but not before being contacted by the commander of Atlantis, Elena Weinberg, who informed Leo of Jehuty's true mission and its original pilot. Leo managed to bring the frame to a warehouse where a mass driver was stationed. With the mass driver, Jehuty could be immediately transported to the hub to meet up with the Atlantis. However, Viola was lying in wait for a rematch. After an intense battle, Jehuty emerged victorious, but Leo refused to destroy Neith and Viola. Jehuty would later be transported to the hub by the mass driver, only to be confronted with a squad of frames intending to blow up the colony using bombs. Leo was able to locate each of them and place them in a vector trap where they would harmlessly detonate in another space. Afterwards, Jehuty would clash blades with a heavily damaged Neith. Neith was eventually bested and disabled when one of the dislodged bombs exploded in front of it, causing it to drift into Jupiter where it later disintegrated in the atmosphere.

All of a sudden, Jehuty was confronted by surprise by its brother unit, Anubis, the machine being piloted by BAHRAM's commander, Nohman and Rikoah's son. The frame's superiority and ability to seemingly warp was far too much for Jehuty to handle as ADA suggested. Leo could only flee and avoid the machine's surprise attacks until the Atlantis arrived to aid in Jehuty's escape. Safely onboard, Jehuty was stored in the shuttle where ADA at last revealed her true mission to Leo. Because Leo had grown attached to ADA, this would later lead him to steal Jehuty at some point from the UNSF and hide it away in Callisto, never to be found or used again so that ADA may never be sacrificed in her ultimate mission.

Years later however, Jehuty was rediscovered by former BAHRAM runner Dingo Egret, who ended up taking the frame out of desperation during BAHRAM's raid on the moon to retrieve the machine. While most of its forces were staved off and even confronting a new model, Ardjet, it was successfully taken back when Anubis appeared again, this time with a seemingly revived Neith called Nephtis. However, BAHRAM would again be undermined when the runner of Ardjet, Ken Marinaris, hid a dying Dingo brutally shot by Nohman saved his life by tying his life support to Jehuty. Essentially, the two had become one and Dingo was forced to operate Jehuty or die if he attempted to abandon it.

In Zone of the Enders: The 2nd Runner, Jehuty is able to ascend to multiple forms that enhance its abilities.

The form Jehuty ascends to after the Zero Shift program has fully integrated into the frame. It takes on a very faint light greenish-glow with lighter armor. Alongside the newly available Zero Shift, the fins from its lower rear detach and operate as OPTIONs, floating devices that augment and support Jehuty's attacks, providing for effective close and long range attacks. In addition, it gains a new auto-shielding capability that automatically deflects any shots weaker than a Burst one. Its aura changes to a light green. It is in this form that Jehuty becomes Anubis' equal, able to keep up and fight it with equal speed and power

A crippled state of Jehuty that comes about when Nohman unleashes the path to Phobos, the massive amounts of compressed space nearly destroys it. Most of its armor has been destroyed and its left arm has been damaged beyond use, rendering its shield inoperable as well as having lost the autoshield. It loses the ability to use all Subweapons except for Grab and Zero Shift as well as having lost its Burst, normal and dash shots. Despite the extensive damage it has suffered, it does not appear to have lost any of its power as it is still able to match and eventually defeat Anubis. Interestingly, in normal gameplay, Damaged Jehuty has unlimited subweapon energy, possibly to reroute energy from areas rendered useless. In addition, a few parts of the main game will be excluded such as looking for Taper due to the exclusion of projectile attacks even if the EQUIP option is used.

Jehuty's final form after defeating Anubis and absorbing its power. Its broken armor has been discarded, the torso having been reduced to its bare essentials, including its head, becoming white and skull-like. Its back now features a bare spinal-like appearance as well. In this form, Jehuty surpasses Anubis in every way, taking its place as the strongest mech in the entire series. Though it loses the OPTION function of Ver. 2, it retains the auto shield. Its power has been boosted to incredible levels, able to destroy any enemy short of a boss with one simple attack. Its throwing attack has been changed as well; instead of spinning around, Jehuty's mouth opens and shoots out a black pike-like 'tongue', devouring the captured frame until they are destroyed. Finally, its aura changes to a pearly white. The end credits sequence showcases that Naked Jehuty eventually regenerates its full armor while recovering from the damage inflicted by Aumann's destruction, but it retains its new head shape.

Jehuty's original name was "Djehety"(chih-how-tee) but was given the name "Thoth" by the Greeks and was given the power of knowledge and the ability of writing. Jehuty's blade also represents Thoth's staff of knowledge, which is often held back-handed against its owner's arm. Thoth became one of the two great deities (ma'at) who stood on one of two sides of Ra's boat, dealing judgement to the dead alongside Anubis. Although Thoth disagreed with most of Anubis's actions in worthy judgement, Thoth and Anubis also worked together as the two messengers of the gods along with Ra. Both Anubis and Thoth acted with the great pharaoh Amon-Ra in the rebellion Hyksos and the rule of Ahmose. After the rebellion Amon-Ra foretold Anubis and Thoth that they were of familial blood (Jehuty is Anubis's nephew). This caused tension and great anger between the two, fighting over on who should be at Ra's side and be granted fusion. These phenomenon are represented in the fight between Jehuty and Anubis over Aumann's activation. 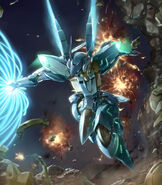 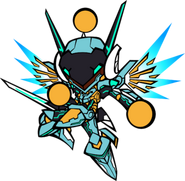 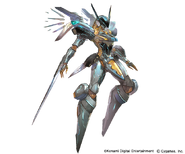