Zone of the Enders Wiki
Register
Don't have an account?
Sign In
Advertisement
in: Characters, Characters - ZOE: 2nd Runner, The 2nd Runner

Edit
watch 01:36
We're Getting Mutants in the MCU - The Loop
Do you like this video?
Play Sound

Zone of the Enders: The 2nd Runner

Ken Marinaris (ケン・マリネリス Ken Marinerisu) is the runner of Ardjet, an Orbital Frame that has the ability to launch massive amount of wisp missiles.[1] Although a skilled runner, she unfortunately cannot pilot an Orbital Frame without an A.I.

Ken appears in the 2nd Runner as an enemy near the beginning of the game. She is also the one who saved Dingo Egret after he was fatally wounded by Nohman. She attached Dingo to Jehuty for life support.

Near the beginning of the game she claims to be a spy from the UNSF, and did not expect Dingo to trust her. She confesses that she is actually a BAHRAM soldier trying to revolt, mainly due to the fact that her father was one of the soldiers in Dingo's unit who died trying to transport the Aumaan project.

After Nohman raids Lloyd's laboratory, Ken is discovered and is forced to pilot the Anubis decoy to guard the fake Aumaan beneath Vascilia county. The Urenbeck Catapult on Phobos, however, transports her to the moon, along with Dingo, Leo, and Nohman, where she remains roughly stationary for the duration of the game.

After Dingo survives aboard a significantly damaged Naked Jehuty, Ken arrives to support him via the Anubis decoy and later, detach him from Jehuty so that he could receive a working pair of heart and lungs. 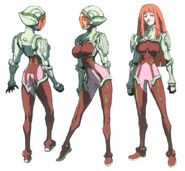