ZOE, ZOE: The 2nd Runner
Leo Stenbuck (レオ・ステンバック Reo Sutenbakku) is the main protagonist of the first Zone of the Enders game. He is Jehuty's first runner (pilot) and makes a second appearance in the sequel piloting the experimental LEV Vic Viper.

Leo grew up on the space colony Antilia orbiting Jupiter's moon Europa. The child of a broken family, Leo's parents divorced when he was only ten years old, custody arguments revealing him to be an unwanted child on both sides. Leo's mother left the household soon after, leaving him and his father to fend for themselves.

Leo's social life suffered as well, as Leo became the target of constant bullying amongst his peers. With the exception of Celvice Klein, Leo's own friends disliked him.

During BAHRAM's invasion of the colony Antilia, Leo stumbles upon the orbital frame Jehuty and uses it to fend off his attackers. Demonstrating a natural ability for piloting and combat, he attracts the attention of resistance officer Elena Weinberg who reveals that Jehuty is "the key to winning the war." With Jehuty's intended pilot dead, Leo is tasked the mission of transporting the frame to the civilian ship Antlantis, a job he reluctantly accepts.

During his mission, Leo rescues Celvice and over time, develops a friendship with A.D.A, Jehuty's stern A.I.

At the climax of the game, he defeats Viola, narrowly escapes a Nohman-piloted Anubis, and successfully delivers Jehuty to the UNSF. To his lament, he learns that A.D.A's sole purpose is one of eventual self-destruction.

After Leo docks Jehuty on board the space carrier Atlantis, he is shown having become a "Special Task Corporal" upon requesting assistance to Elena Weinberg and the UNSF. He subsequently trains in the use of the Vic Viper under Rock Thunderheart's supervision and guidance. The earliest log, about a month after he began training, shows that he held a 12-27 win-loss record against Thunderheart, but later improves to a 38-2 record.[1][2]

It is also revealed that Leo's father left the shelters to look for him during the Antilia raid and was listed among the few casualties of the raid. Leo becomes disturbed by his inability to protect his friends and family, which worsens with Thunderheart's death. The UNSF had also made plans to send Jehuty to Mars to be dismantled, but Leo manages to change the course of the Urenbeck Catapult to launch Jehuty toward Callisto's Metatron mines instead, keeping it intact until the events of the 2nd Runner. Leo also resolves to defeat BAHRAM's Orbital Frames on his own with the Vic Viper.[3]

Zone of the Enders: The 2nd Runner[]

Two years following the events of the first game, Leo is shown to have matured greatly, both in experience and attitude. Jehuty and its new runner Dingo encounter Leo later on Mars. Mistaken by Leo as an enemy, he attacks Jehuty in an attempt to force Dingo out of the frame. In an inconclusive battle, A.D.A. recognizes Leo and brings the fight to an end. After deciding that he can trust Dingo, Leo leaves to continue gathering surviving UNSF units for a massive assault on BAHRAM.

Leo catches up to Dingo in his infiltration of the BAHRAM fortress. They both attempt to thwart Anubis piloted by Colonel Nohman. However, in the vast underground facility, they don't stick together to work cooperatively, which results in the crippling of Leo's Vic Viper, after he attempts to defeat a duplicate of Anubis, with Ken Marinaris being held in the cockpit without control of the Frame.

He, Dingo, along with Ken, get caught in a Urenbeck Catapult path imbound to Phobos instigated by Nohman. With his orbital frame badly damaged, he can do nothing as a damaged Jehuty must fight an undamaged Anubis. Fortunately however, Dingo is successful in ovecoming these odds, and is rescued along with Ken from a severe impact landing on Phobos. On the Martian moon, Nohman also survives his rough landing, and makes his way into the inner core of Aumaan.

As Dingo fights his way past many orbital frames in his newly restored, and intensly more powerful form of Jehuty, called Naked Jehuty, Leo staggers his Vic Viper to the core of Aumaan as well. Inside the core, Jehuty battles Anubis once more; this time, in superb condition. However, these efforts would almost end in vain. Just as Anubis gets partially destroyed with the pilot, Aumaan begins starting up. Leo tries to stifle the impeding destruction, but fails.

The only way to stop Aumaan is a self-destruct mechanism the UNSF placed into Jehuty for the purpose of canceling out the explosion. Dingo in Jehuty, finds himself in the black void of Aumaan's energy, and comes across the crippled head of Anubis, which he throws into the center of the core. This cancels out the explosion, and he, Leo, along with Ken, make it back to a UNSF rescue vessel safely.

When Leo goes to greet A.D.A., her first words are "Did I disobey an order?" to which Leo replies happily with a smile, "Never mind about that." As Dingo is being taken away by a medical team to have his heart and lungs replaced with organic ones, Leo looks up at Jehuty pensively, being relieved to be reunited with Jehuty. 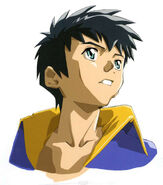 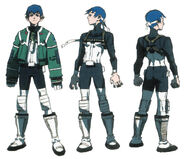