Ridley Hardiman (リドリー・ハーディマン Ridorī Hādiman, more frequently called "Nohman (ノウマン Nouman'") is one of the leaders of BAHRAM and the main villain of the series.

Nohman's face is not revealed until The 2nd Runner, in which he is shown with pale white skin and pure white hair, something Dingo found unsettling. Notably, he also appears to have aged significantly, carrying a walking stick when he meets Dingo only around two years after he was featured in Dolores,i as an average adult with slightly pale skin and short purple hair. This radical change is hinted at as being due to prolonged exposure to Metatron. In The 2nd Runner, he wears a peculiar white pilot suit featuring a cloth similar to a cape, clawed fingers, and a seemingly prehensile tail matching that of Anubis.

Prior to obtaining Anubis, Nohman was mentioned to have been very sharp. Dingo Egret described a moment when Nohman rooted out a traitor in their unit in BAHRAM, whom nobody else had suspected. He also expressed some degree of attachment to his father in Aumaan and Anubis, both of which his father had designed and which he would frequently make use of throughout the events of The 2nd Runner.

In Zone of the Enders, Nohman seemed to have the personality of a military superior when addressing Viola Gyune, sternly telling her to evacuate upon noticing that she was facing Jehuty and becoming annoyed when Viola insists on challenging Leo Stenbuck, a thirteen-year-old boy, to a dogfight. However, Nohman does recognize Leo as a threat after he becomes responsible for defeating Viola and promptly targets Leo to defeat him before he could grow into a more serious threat.   In Dolores,i, Nohman is depicted as being fairly carefree and lax, often speaking and acting casually despite his high military status. This lax personality brings him into conflict with Napth Pleminger and Rebecca Hunter, both of whom were, at the time, highly-strung on ideals of Martian freedom and independence. Also in contrast, he admits that he had lost touch with those ideals and regarded them as "lost causes", despite being able to accomplish them easily with Anubis. This may be related to the effects of the Metatron on causing him to celebrate nihilism, later demonstrated when he appears before Radium right before the latter attempts to topple the Earth Orbital Elevator, only to disappear shortly afterward for an unexplained reason and leaving him to continue his assault, which has the foreseen result of wiping out Earth's population and all of life in the universe in the long run.

In The 2nd Runner, Nohman has become noticeably insane, madly proclaiming that destruction "is the will of Metatron" and endeavoring "to destroy all".

Nohman's most defining quality is his ruthlessness. He had set up a trap for Dingo and his troops six years prior to the events of The 2nd Runner, smiling evilly over the monitor and telling Dingo to "just give up". In Dolores,i, Nohman also uses Zero Shift to appear right next to Rebecca and Selkis, and then proceeded to unleash a series of blows with Anubis' staff in the "mock battle". Upon hearing Dingo's refusal to join him, he shoots Dingo several times and told Ken Marinaris to dispose of the body, and later kills Lloyd by crushing Inhert's head.

Nohman was presumably involved in Project Aumaan over a certain period of time. After his father's death, Nohman immediately took control of the project.

Four years prior to the Antilia raid and six years prior to the events of The 2nd Runner, Nohman would direct Dingo and the rest of his crew to transport Metatron to Callisto, while leaking out their position to the UNSF and leaving them all to die.

At several points, his voice is heard giving commands to Slash, Axe, Nightraid, and Viola. Nohman is often heard admonishing Viola for her sentiments and obsession with defeating Leo Stenbuck. He finally appears in Anubis after Leo defeats Viola and resolves to kill him as a farewell gift to Viola. However, despite Nohman's victory, Elena Weinberg gives Leo cover with the Atlantis' lasers and prevents him from giving chase.

Further background on the Antilia Raid is later given in Dolores i, when it is revealed that the raid was ordered by BAHRAM leader General Rutger Tyusha. Rutger faced a lot of opposition to the raid from the moderate political factions within Vascilia county, however, he compares the plight of Antilia as analogous to Mars and that failure to act against the UNSF seizure of the colony would only doom Mars to the same fate. Despite painting the operation as liberation to the public, BAHRAM committed mass atrocities on the populace in Antilia and after the seizure of Jehuty failed, General Rutger even ordered Antilia destroyed - although this was ultimately prevented by Leo Stenbuck.

After the Antilia Raid, Nohman first appears docking Anubis in a BAHRAM base and greeting Napth Pleminger. He voices his disillusionment with chasing after "useless causes" and tests Anubis again in a mock battle, the lending Selkis to Rebecca Hunter and easily demonstrating Anubis's superiority with Zero Shift and a large Vector Trap before leaving due to unexplained reasons. Nohman makes it clear to Napth after being admonished for disrespecting General Rutger Tyusha for not attending the Parade of Triumphant Returns, that he never considered himself under Rutger's jurisdiction, to begin with and will not use Anubis to support him as he intends to proceed with the Aumaan plan.

Nohman later appears in Anubis right as Radium is about to attack the Earth Orbital Elevator. Shortly after, however, he disappears, allowing Radium to attack Anchor Station unopposed. Nohman seemingly expected the plan to fail and allowed Radium to proceed unopposed as he expected him to die, making it easy for Nohman to seize control of the entirety of BAHRAM in the aftermath.

The Fist of Mars[]

It is revealed through the dialogue of other characters that Nohman had a competitor for BAHRAM leadership named Ani Aegis. Aegis had attempted to assassinate Nohman, but failed to do so and disappeared. Nohman is mentioned at the end of the story when Amante Furlair calls him and addresses him by his first name. He warns her about Leo in his call, enough so that Amante is actually forced to consider the boy pilot a worthy opponent. In any case, Amante and the BAHRAM leadership decide to support Nohman as BAHRAM commander-in-chief over Ani Aegis, now going by the alias Lance Jimmer.

In the years following Fist of Mars, a new army of Orbital Frames, developed based on Anubis' technology and using the limitless resources of the Metatron fortress Aumann, is unleashed on the UNSF enabling BAHRAM to take complete control of Mars and Deimos Station.

Nohman directs the BAHRAM battleship to attack the Metatron mines on Callisto to seize Jehuty. He presumably allows Dingo and Jehuty to enter after Dingo defeats Ken and Ardjet in combat, and eventually defeats Dingo after the latter faces off against Nephtis and other enemies. Nohman then directs Dingo to dock Jehuty and meet with him.

Once Dingo docks, Nohman invites Dingo to return to BAHRAM under his command. Dingo adamantly refuses on the grounds of Nohman's betrayal six years prior and is fatally shot for his refusal. Nohman then orders Ken to dispose of the body, without knowing her intentions to revive Dingo on Jehuty.

Months later, as Aumaan nears completion, Nohman realizes that Jehuty and Dingo are actually alive and gives chase to Lloyd's laboratory, killing Lloyd shortly upon arrival. Later, Nohman would order Ken to be placed in a fake Anubis in the false Aumaan and battle Dingo while he sat in the real one and watched, after which he effortlessly defeated Leo and the Vic Viper. He activates the Urenbeck Catapult on Phobos and transports the entire party to the Martian moon, during which he fights with Dingo and a damaged Jehuty and loses. Nohman, would, however, enter the center of Phobos to upgrade the damaged Anubis to Aumaan Anubis, after which he battles with Dingo.

"So what? Those scum died so ungracefully, I wanted to see it with my own eyes!"
—Nohman's last words

Nohman loses this last battle, however, and is confronted by Dingo about his comrades. He demonstrates his apathy shortly before Dingo finishes him off, and is killed when Jehuty bifurcates Anubis across the center. 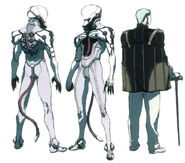