Zone of the Enders Wiki
Register
Don't have an account?
Sign In
Advertisement
in: Characters, Characters - ZOE

Thunderheart loves the adventure of taking on dangerous tasks, and hopes to fulfill his mission of bringing Jehuty to Mars. At the same time, Rock holds a solemn respect for his deceased comrades and friends, angrily scolding Leo for claiming that soldiers do not care if their comrades die and following up by telling him that Alan was his best friend and Elena Weinberg's boyfriend.

Initially, Thunder doubts Leo Stenbuck's ability to pilot Jehuty through Antilia, but eventually comes to recognize Leo as a competent fighter and Jehuty's true runner, admitting that even he himself would not have been able to defeat Neith and Viola Gyune.

When Viola shoots Celvice Klein in order to rile up Leo for their eventual dogfight, Thunder immediately pulls out his own pistol, but is quickly grazed with a shot to the wrist, preventing him from attacking Viola. Thunderheart agrees to look after Celvice as Leo proceeds to stop the bombs.

Thunder becomes a role model to Leo and begins to teach him how to pilot LEV's on January 19, 2173. However, Thunder's records hardly ever surpass his student's when the two train on the Vic Viper and actually decrease significantly, dropping from a 27-12 win-loss record to a 2-38 one, though this could be more an indication of Leo's improvement. On at least one occasion, the two have been shown to get into fistfights with one another, with neither stating how the fight started, showing the extent and depth of their friendship and respect for one another.[1] Later, Thunder would go as far as to tell fellow Atlantis worker Mariko Owen that "Leo is going to make one hell of a pilot".[2]

Early December 2173, Thunder dies in battle and Leo mourns his death. It is implied from his telling Leo of the UNSF's plans to dismantle Jehuty on Mars that Thunder understood how important Jehuty was to Leo and trusted Leo to keep Jehuty safe while he was killed by an onslaught of BAHRAM forces.[2] 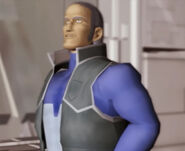