Zone of the Enders: The 2nd Runner

Vic Viper (or V2 for short) is the LEV piloted by Leo Stenbuck in Zone of the Enders: The 2nd Runner.

The Vic Viper can transform into a robotic mecha form in similar fashion to VF-1 Valkyries from Macross or the titular "mobile suit" of Zeta Gundam. Its performance is impressive considering its status as a LEV, which is heavily implied by the game series' storyline to be the radically inferior mecha type used prior to the advent of the much more advanced Orbital Frames. Shinkawa states however, that the Vic Viper is a new hybrid of Earth technology and Orbital Frame technology.

True to its name, the Vic Viper uses many of the traditional Gradius weapons and shields. When fighting the Vic Viper slowly increases its OPTION count to multiply its firepower, and often uses the Missiles and Laser attack as well as the unexpected Ripple Laser. When fighting Vic Viper a female computer voice announces the creation of an OPTION, the use of a weapon, or the use of shields in very similar fashion to the announcer in the classic Gradius games. The Vic Viper in fighter mode is extremely fast and fights much as one would expect a 3D incarnation of the ship to fight, as well as the twist of having it change into a robot for more direct attack. The Vic Viper is impressively durable, as it remains operational after being only a short distance away from the epicenter of Aumann's spatial collapse and the explosion of Anubis, while Naked Jehuty was crippled to the point of falling apart from being only slightly closer to the same.

The Vic Viper was used by Leo Stenbuck after the events of the first game. After leaving Antilia and boarding the Atlantis, he trains in the use of the V2 with Rock Thunderheart and continues the fight on behalf of the UNSF on Mars. According to the in between storyline on Konami's official website and story writer notes, there were two Vic Viper prototypes aboard the freighter Atlantis before the start of the game. Unit 1 was piloted by Rock Thunderheart and Unit 2 was piloted by Leo, and later enhanced thanks to research of the Jehuty (which would explain its use of Gauntlet, and Vector Trap-like OPTIONS among other powerful weaponry far more advanced than the typical LEV). Thunderheart's Vic Viper is destroyed in battle prior to the start of the second game.

The Vic Viper is first seen in the game when Dingo Egret, the subsequent pilot of Jehuty (and player character of the game), first makes it down to the surface of Mars. Thinking that Jehuty had been stolen or reclaimed by BAHRAM, Leo attacks Dingo in an attempt to force him to turn the Orbital Frame over. Despite Jehuty being the pinnacle of Orbital Frame technology, Vic Viper is shown to be quite a match for Jehuty, due to a combination of the V2's advanced design and Leo's piloting skill. The Vic Viper serves as a Boss in the game, with the player having to fight off Leo. After the boss fight ends, the two machines clash again, until A.D.A. (Jehuty's A.I. whom Leo had befriended in the first game) brings the battle to an end when she recognizes his fighting style. Deciding to put his trust in Dingo, Leo departs, after telling Dingo why he had hidden Jehuty in the first place.

The Vic Viper appears later in the game, where Leo and Dingo help a large group of UNSF LEV's Assault BAHRAM's base on Mars. In this stage of the game, the Player and Vic Viper have to protect the LEV's during the assault, fighting off an army of hundreds of enemy Orbital Frames. In addition to fighting alongside Jehuty, Vic Viper can also heal damaged LEV's, if the player "marks" them for Leo using the Geyser Subweapon.

The Vic Viper is damaged late in the game by Anubis, and crippled when Leo attempts to stop the activation of Aumaan, but manages to survive to the end of the game.

Due to its intense power and speed, Vic Viper is by far the most dangerous machine in the game, even moreso than Anubis despite being a LEV. It also has two forms it can switch between. In LEV form, it has limited melee range but can rack up hits quickly and can perform its combo without the need to hit the opponent first. Its Burst and Dash Shot has it fire a short ranged Gauntlet that can break through guards and cause additional Crash damage. In its fighter mode, it gains access to its full moveset which includes lasers, Ripple shots, Missiles, Shield and Gauntlets whose range increases. By pressing R3, it can deploy up to three OPTIONs which copy each and every one of its attacks, but must sacrifice health to deploy each one and will disappear if hit enough times or if Vic Viper transforms back. Its weakness lies in its' relatively light armor and it can be thrown great distances. 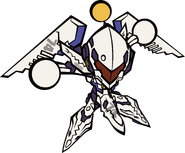