Viola's dedication to BAHRAM and the Martian cause is strong, as she lies about her illness in order to be enlisted as a soldier. The deaths of her family and friends at the hands of the UNSF forces her to dedicate herself to the military cause, and after Dr. Links finds out about her illness, she begs her not to discharge her from the military.

However, her greater loyalties lie with fellow BAHRAM pilot Radium Lavans. Viola sees Radium as the man responsible for getting her off the streets and giving her a reason to live. While she worships him in the romantic sense, Radium only reciprocates in a platonic sense due to his own romance with Dolores Hayes.

After Radium's death during the Deimos Incident, Viola lost her reason to live and wanted to die as a soldier on the battlefield, but could not find an opponent that was strong enough to kill her.

Radium Lavans and Viola had met when she was a homeless youth who had tried to mug Radium. Even though Radium easily subdued her, he is impressed with her tenacity, encouraging her to enlist in BAHRAM and turn it against Earth. Eventually, the two of them are respected pilots, even though she is notably more calmer and focused than her senior. She briefly comments on Radium's reckless tactics during a training exercise, where Radium recklessly takes up his LEV into a near-suicide charge. Later, after witnessing one of her comrades being casually attacked by a UNSF soldier, Viola receives word that she and Radium would be transferred to test-pilot Idolo , the first Orbital Frame .

When it comes to her turn to pilot Idolo, however, Viola is denied access to controls and even injured by one of Idolo's sparks, as it has bonded to Radium from his training.

Unware of Radium's survival, Viola dedicates herself fully to the BAHRAM cause, all the while dreaming of a rival skilled enough to put her out of her misery. This fatalism would lead her to confront Leo Stenbuck as he inadvertantly steals Jehuty during the Battle of Antilia. Even though it takes Nohman calling her off to dissuade her from continuing her first battle, Viola eagerly waits for Leo to come to her after he neutralizes her fellow BAHRAM pilots. Even though Leo defeats her in a narrow battle, she is enraged when he spares her, and wounds Celvice in an attempt to get Leo to kill her in battle. When Nohman shows a rare display of concern and encourages her to either pull out or at least, pilot his old Selkis, Viola ignores him, and battles Jehuty in the Antilia Hub using her damaged Neith. Even though her rage has caused Neith to become a zombified abomination, Leo once again defeats her, and a stray bomb blows her Orbital Frame out into Jupiter's gravity well. After dissuading Leo from attempting to rescue her, Viola shares her final thoughts and farewell before the remnants of Neith is burned up in Jupiter's atmosphere.

In Zone of the Enders: Dolores,i, Viola appears in Radium's delusion as he fights with James Links and Dolores. Radium, rather than to hear her out, assumes that she had arrived to interfere in his wedding with Dolores Hayes, and materializes an energy gun on his right arm and shoots her through the chest. Viola is revealed to correspond to his protege, Rebecca Hunter, who takes the damage that Hathor dishes out. Later, as Dolores attempts to pull the Earth Orbital Elevator to the moon, Viola appears in Radium's dream as he docks his Orbital Frame and helps the child Dolores reach her balloon, corresponding to his assisting her Metatron energy output with his own Orbital Frame and Raptors. Viola smiles at Radium's action in the dream before Radium succumbs to his injuries and Metatron draining.

In Zone of the Enders: The 2nd Runner, Viola is revived twice by Nohman as a battle A.I for Nephtis. The A.I. differs markedly from its human template; while the original Viola sought to be killed in battle, the AI is in a psychotic rage, seeking revenge against Jehuty for defeating it in its prior life. 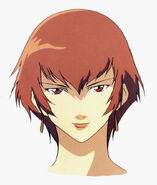 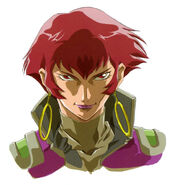