Zone of the Enders Wiki
Register
Don't have an account?
Sign In
Advertisement
in: ZOE Game Title Stub, Games

Zone of the Enders, also known as Z.O.E., is a video game that was developed and published by Konami in 2001 for the PlayStation 2. It was produced by, and is closely associated with Hideo Kojima. The game is based around mecha combat. The mechas were designed by Yoji Shinkawa, the character and mechanical designer for the Metal Gear series. The game was originally sold packaged with a preview demo of the then-upcoming Metal Gear Solid 2: Sons of Liberty.

Following the release of the three games, two anime series were produced: one was a film OVA entitled Zone of the Enders: 2167 IDOLO, which is set just prior to the events of the first game at an event called the Deimos Incident (It was initially released as part of a premium for the Special Edition release of the first ZOE game, and to supply some of the game's back story.) The other was a 26-episode TV series called Zone of the Enders: Dolores,i. The animation production for two series was handled by Sunrise, an animation studio best known for its Gundam franchise. All three games and both anime series have been commercially released outside of Japan.

While ZOE focuses mostly on the loss of innocence of a child faced with having to kill to survive, 2167 IDOLO and The Fist of Mars explore issues surrounding colonialism, independence, political and personal power and ambitions, and revenge - many of the same themes explored in the various Mobile Suit Gundam series. Dolores, i adds the emotional conflicts and tensions of a family, split by distance and circumstance, as they try to come together to overcome their differences in the face of an impending conflict.

Dolores, i and Fist of Mars are officially regarded as part of the Z.O.E. canon, with Kojima's consent.

The main protagonist of the game, Leo is a withdrawn youth who has difficulties getting along with others. While trying to evade the rampaging forces of BAHRAM, he accidentally boards the Orbital Frame, Jehuty, and thus is forced against his will into the Antilia conflict. His mother and father did not care much for him, and it was on rare occasions that they spent time together.

A surprisingly mature 14-year-old girl, Celvice volunteers her time tending to orphans at a local church. Having lost both parents during their emigration to Antilia, she has grown very close to Leo. While on her way back to the church during the Antilia Raid, she is discovered by a small group of Raptors, who are timely destroyed by Leo as he comes to her aid in Jehuty. She then joins Leo and ADA (Jehuty's AI) as they travel through Antilia on their mission to bring Jehuty to Atlantis.

She is a decorated officer for BAHRAM's primary offensive unit. A belligerent fighter, she has caused problems for many experienced UNSF pilots. Oddly enough, she finds an equal in Leo Stenbuck, who refuses to kill her on two separate occasions despite her aggressiveness towards him and Celvice Klein. Not afraid of death due to her prolonged experiences on the battlefield, she is always at the forefront of a battle, waiting to find one who has the ability to kill her so that she can be with the only person she's ever deeply cared about; Radium Lavans, who died during the events of IDOLO 2167.

A worker and LEV pilot on the civilian transport vessel Atlantis. Initially has his doubts about allowing Leo to pilot Jehuty through Antilia, he eventually comes to recognize Leo as Jehuty's true Runner, admitting that even he would not have been able to defeat Neith and Viola. He loves the adventure of taking on dangerous tasks, and he hopes to fulfill his mission of bringing Jehuty to Mars. Eventually, he will become a role model to the young Leo Stenbuck and teach him how to pilot LEVs after the events of the first game.

Commander of the civilian transport vessel Atlantis, she is a rational and kind woman. Originally, her lover Alan was slated to pilot Jehuty, but sadly he was killed while on his way to the factory where Jehuty was built. Despite learning that he'd died and that a mere boy was now the Runner of Jehuty, she persevered through her grief and helped Leo in his mission to escape Antilia. She later becomes Leo's commanding officer and something resembling a mentor to the young man. She commands the troupe trying to secure Jehuty for transport to Mars.

The commanding officer of the BAHRAM forces that were attacking Antilia. He came across as a very rational and calm commander who often urged Viola to take caution with Leo; ordering her retreat at one point. His goal in the mission was to secure target Alpha; which was the Orbital Frame Anubis, and he does this midway through the game as it is being transported. He formely piloted a Selkis and he tells Viola during the game that she can have it after the mission.
He mentions to both Viola and Leo how great Anubis is and calls it "the perfect Orbital Frame". He confronts Leo in Anubis at the end of the game, but Leo escapes with the help of the Atlantis when he realises that Jehuty is no match for its twin Frame. As Anubis is armed with Zero Shift, a device that can instantly teleport an orbital frame.

ANUBIS Zone of the Enders Original Soundtrack (2003)
No information

The soundtrack to Zone of the Enders was released April 25, 2001 on the album Zone of the Enders Z.O.E Original Soundtrack by Konami Music Entertainment. Almost all the music was composed by the trio Norihiko Hibino (日比野 則彦), Maki Kirioka (桐岡麻季) and Akihiro Honda (本田晃弘). Also, Shuichi Kobori (小堀修一) composed "Global 2 (Virus)" and Toshiyuki Kakuta (角田利之), "City (The Earth Light)". The theme song "KISS ME SUNLIGHTS" was composed and performed by Heart of Air 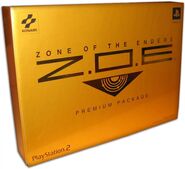